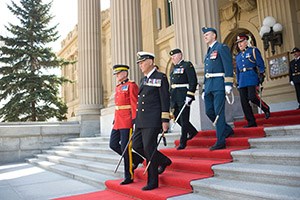 At major ceremonial events, such as the reading of the Speech from the Throne at the opening of the Legislature, the Lieutenant Governor is accompanied by members of the Vice-Regal Escort. They also accompany her, upon request, to other events such as the New Year's Day Levee.

The Vice-Regal Escort is comprised of the highest ranking Alberta members of the Military, the RCMP and the City Police. This group was traditionally known as the "Gentlemen Escort." Historically, the sovereign was accompanied to Parliament by officers who were loyal to the Crown. Because the Monarch is not allowed into the Legislature without being invited in by the Speaker, the Escort was present to ensure that the monarch was "protected." The tradition has continued to the present day across Canada, not out of a need for security but rather as a sign of respect for the Queen's representative.