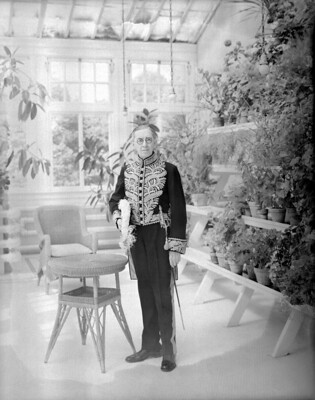 The Civil Uniform was worn by Alberta's Lieutenant Governors from 1905 to 1974. From 1987 to 1991, the Honourable Helen Hunley wore a specially designed ceremonial robe in place of a Civil Uniform. In February 2012, Colonel (Ret'd) the Honourable Donald S. Ethell reintroduced the tradition during the last three years of his term in office. His Civil Uniform was acquired from Nova Scotia and was given to Alberta on extended loan. The uniform once belonged to Brigadier Honourable Victor de Bedia Oland who served as Lieutenant Governor of Nova Scotia from 1968 to 1973.

The Second Class Half Dress Civil Uniform worm by Lieutenant Governor Ethell consisted of a jacket, trousers and a sword & scabbard. The jacket featured gilt buttons bearing the Royal Arms, and the trunk, collar and cuffs of the jacket were elaborately embroidered with oak leaves. The trousers had wire gold lacing displaying oak leaves down each seam. The hat had a row of ostrich plumes along the top seam. A gilt court sword with gold sword knot was worn on the left side.

For more information on the Civil Uniform as it has been worn in Canada please consult Corinna Pike & Christopher McCreery, Canadian Symbols of Authority; Rods, Maces and Chains of Office (Toronto: Dundurn Press, 2011).