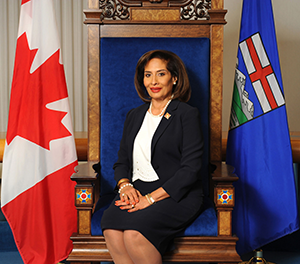 Salma Lakhani was installed as Alberta’s 19th Lieutenant Governor on August 26, 2020. Her longstanding service as a community leader and volunteer has been guided by her deep commitment to the values of pluralism and inclusion and her dedication to championing those who face barriers in life.

Salma Lakhani was born and raised in Kampala, Uganda. She is a proud Ismaili Muslim who inherited her devotion to giving back from her parents, Abdul and Malek Rajabali, who were active members of their community. A keen student with a deep seeded love of education, Salma attended the Aga Khan School in Kampala before pursuing post-secondary studies at the University of Manchester in England. Her life took an unforeseen and dramatic turn during a summer visit home to Kampala in 1972, when it was announced that the country’s entire Asian minority population was to be expelled. Salma’s parents pressed her to return immediately to England, travelling on her Ugandan passport. Within three months, her family would be stripped of virtually everything and she would be stranded in England with no funds to continue her education and no valid passport. She had become a stateless person.

Salma had two saving graces that sustained her through this challenging time. First, she had the love and support of her fellow exile and future husband, Zaheer Lakhani. The couple also learned that their tuition would be covered by the British government, allowing Salma to complete her Honours degree in Clinical Biochemistry from the University of Manchester and Zaheer to graduate in Medicine from the University of Leeds. The couple married in Leeds in 1977. That year, the University of Alberta accepted Zaheer’s application to continue his postgraduate studies in Edmonton and the Lakhanis began writing a new chapter in Canada.

Dr. Lakhani went on to establish himself as a cardiologist while Salma helped to manage his practice and operated a business focused on early childhood education, which developed out of her innate affinity for teaching. She also began looking for opportunities to give back and to help those in need to thrive. She became one of the first mentors in NorQuest College’s Youth in Transition program, providing invaluable guidance for students with English as a second language, and she was a founding member of the college’s 1000 Women: A Million Possibilities movement. Salma has also shared her skills, energy and passion for service with the Lois Hole Hospital for Women, Kids Kottage, Sorrentino’s Compassion House, the Alberta Cancer Board, the Zebra Foundation and Aga Khan Foundation Canada. She has further demonstrated her commitment to pluralism and fostering diversity through her work as a board member of the John Humphrey Centre for Peace and Human Rights. During a year’s sabbatical in the late 1990's, while Dr. Lakhani helped set up cardiac services at a hospital in Dar es Salaam, Tanzania, Her Honour volunteered at two of the city’s schools and with local women’s charity groups.

Lieutenant Governor Lakhani has received the Alberta Centennial and the Queen Elizabeth II Diamond Jubilee Medal in recognition of her services to community and civil society. NorQuest College awarded her an Honorary Diploma in Community Services Leadership in 2019. Upon her installation as Alberta’s vice-regal representative, she became a member of the Alberta Order of Excellence and Chancellor of the Order. Her Honour is Vice-Prior of the St. John Council for Alberta and a Dame of the Order of St. John. She received an Honourary Doctor of Laws degree from the University of Alberta in 2021.