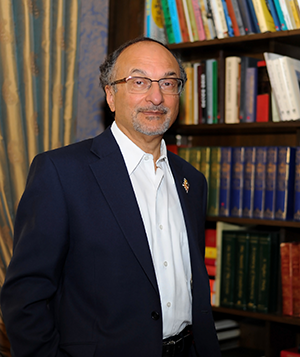 Dr. Zaheer Lakhani came to Canada in 1977 as a stateless ex-Ugandan whose family lost their homes and businesses in Uganda as a result of an edict of the then President, Idi Amin expelling all Ugandans of Asian origin. Zaheer was a medical student at the University of Leeds, England, at that time and unable to return to Uganda after becoming a doctor and working in the UK for two years, chose to come to Canada with his wife, Salma, a graduate in Clinical Biochemistry from the University of Manchester.

On completing his postgraduate training in Cardiology, his chosen field of practice as a hospital consultant since 1983, Dr. Lakhani has served in many different positions as a volunteer. He was Chairman of the growing local Ismaili Muslim Community (1979 to 1984), President of the Edmonton Multicultural Society and initially member and then for three years Chair of the Edmonton Police Commission. He is the Founding President of the Canadian Association of Police Governance and was recognised by the organisation in 2015 with the Emil Kolb award for founding this body, which has grown into an invaluable forum for promoting civilian oversight of Policing organisations across Canada today.

Dr. Lakhani has also served as Chair of the Cross-cultural Roundtable on Security for 3 years, reporting to the Deputy Prime Minister/ Minister responsible for Public Security and Emergency Preparedness at that time, and after that was appointed by the Federal Government to serve on the Advisory Council on National Security to the Canadian Government, a term he completed in 2012.

Zaheer is a past- member of the University of Alberta’s Senate during which time he served as Chair of the Senate’s Task Force on the “International Dimensions of the University of Alberta” as well as Co-chair of the Visiting Committee to the Department of Rehabilitation Medicine. He is a Past President of the Edmonton Academy of Medicine (1995). Other areas of community engagement have included serving as a Board member of the Edmonton Community Foundation , the United Way Capital Region, and AMREF Canada. He currently chairs the Royal Alexandra Hospital Foundation.

In his capacity as a Rotarian, Zaheer has for the past two decades coordinated a programme sending Doctors and Nurses to various countries in East Africa where he himself spent a year doing voluntary work in Tanzania (1996-1997). He is a regular visitor to hospitals in East Africa as an Examiner for two of their medical schools.

Zaheer has given frequent keynote addresses and has been an invited conference speaker at many events, including the Multicultural Education Foundations Annual Breakfast event, the Mahtma Gandhi Annual Dinner, and events by policing organisations, including at a symposium on Public Security by the Conference Board of Canada.

For his voluntary work he has received numerous awards including the Queens Golden and Diamond Jubilee Medals and Rotary’s much respected “Service Above Self” award. During Alberta's centennial celebrations he was recognised by the Alberta Medical Association as one of Alberta’s `Top 100 Doctors of the Century`. In 2006 he was invested as a Member of the Order of Canada.

Dr. Lakhani is a Clinical Professor with the Department of Medicine at the University of Alberta and practices at the Royal Alexandra Hospital in Edmonton and the Sturgeon Community Hospital in St. Albert.