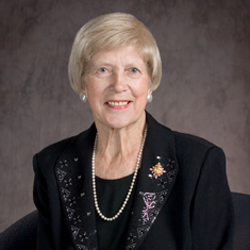 During her term in office, Lieutenant Governor Hole brought a particular focus to causes close to her heart, including libraries, literacy and the arts. She was the founding patron and driving force behind the Lieutenant Governor of Alberta Arts Awards. She attended a high volume of public and ceremonial events and was a popular, sought-after speaker.

Born and raised in Buchanan, Saskatchewan, Mrs. Hole moved to Edmonton in her early teens and completed her secondary education at Strathcona Composite High School. She married Ted Hole and they had two sons, Bill and Jim, and three grandchildren. 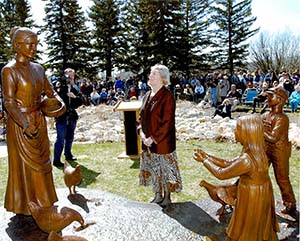 Lieutenant Governor Hole at a May 2002 unveiling of the &quot;Egg Money&quot; art piece at Fish Creek Provincial Park

In 1952, she and her husband Ted bought a mixed farm in St. Albert which, by 1960, they had diversified into a vegetable and mixed garden business. In 1979 the farm was incorporated as Hole's Greenhouses & Gardens Ltd. and their sons joined the business full-time. It has since grown into one of the largest retail greenhouse operations in western Canada.

Mrs. Hole served as a school trustee for the St. Albert School District #6 from 1981 to the fall of 1998. She previously served, for fourteen years, as a trustee and chairperson for the Sturgeon School Division and, for eleven years, as a member of the Athabasca University Governing Council. Mrs. Hole has served as director of the Farm Credit Corporation and as Honourary Chair for the 27th Canadian Congress on Criminal Justice and for the Children's Millennium Fund. She also served as a board member of the Canadian Heritage Garden Foundation, the Child & Adolescent Services Association and the Quality of Life Commission. In 1998 she became Chancellor of the University of Alberta. 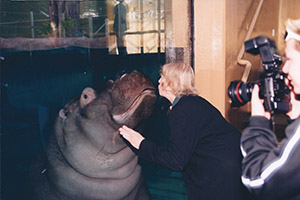 Lieutenant Governor Hole shows her fun loving nature at a January 2003 visit to the Calgary Zoo where she offered a special hello to one of the local denizens.

Mrs. Hole was the author of six gardening books (all Canadian bestsellers) and a collection of life stories, photographs and growing information entitled "I'll Never Marry a Farmer". She was a regular contributor to the Globe and Mail, Edmonton Journal, and the Edmonton Sun, and was the writer of the Canadian portion of the 1999 Old Farmer's Almanac Gardening Companion. She appeared regularly on the "Grapevine" segment of CBC TV's Canadian Gardener. She spoke to nearly 600 gardening groups and businesses across North America, to a total audience of nearly 100,000 people. 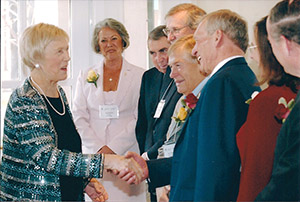 Lieutenant Governor Hole congratulates recipients at a May 2003 Kilam Prize ceremony in Edmonton.

In 1983, Mrs. Hole was awarded an honourary doctorate from Athabasca University and in 1997 received a Distinguished Citizen Honourary Diploma in Business from Grant MacEwan Community College. In 1995 she was named as both Edmonton Business and Professional Woman of the Year and as St. Albert's Citizen of the Year. In 1999 she was appointed a Member of the Order of Canada.

Mrs. Hole died while still in office on January 6, 2005 in Edmonton, Alberta.