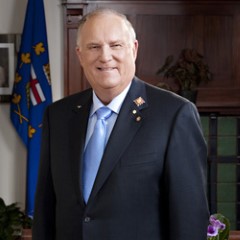 His Honour, Col. (Ret’d) the Honourable Donald S. Ethell was installed as the 17th Lieutenant Governor of Alberta on May 11, 2010. His Vice-Regal duties came following a long and distinguished career in the Canadian Armed Forces as well as civilian service as a military advisor and volunteer with humanitarian causes. He retired from his Vice-Regal duties on June 12, 2015.

Donald Ethell was born in Vancouver in 1937 and raised in Victoria, BC. In 1955 he joined the Canadian Army (Regular) as a rifleman in the Queen’s Own Rifles and then moved to the Princess Patricia’s Canadian Light Infantry in 1970. He was commissioned as an officer in 1972. 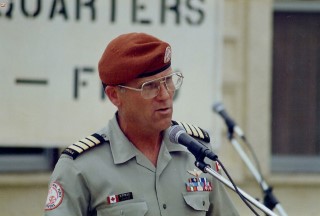 Colonel Ethell is a veteran of 14 peace support operations. His military service included NATO duties in Germany as well as extensive service in Cyprus, Lebanon, Syria, Jordan, Egypt, Israel, Central America and the Balkans. During the first Persian Gulf War he served for 16 months as the Chief of Staff/Deputy Force Commander with the Middle East-based Multinational Force & Observers. From 1987 to 1990, he served in National Defence Headquarters as Director of Peacekeeping Operations. His last tour of duty was as the Canadian Head of Mission to the European Community's Military Mission to the former Yugoslavia during the wars of 1992 in both Croatia and Bosnia. Colonel Ethell retired from the Army in July 1993 as a highly decorated peacekeeper. 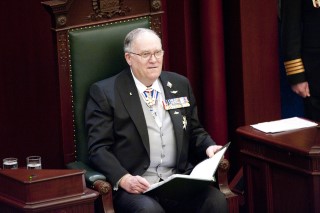 Lieutenant Governor Ethell delivers the 2012 Speech from the Throne.

Following his retirement, Colonel Ethell traveled extensively as a military advisor and began to deepen his focus on humanitarian causes. He became involved with CARE Canada, working with staff responsible for five refugee camps in Eastern Kenya and Somalia. He was also Alberta director of the International Committee for the Relief of Starvation and Suffering (ICROSS) Canada, which delivers aid to the countless African children and adults facing starvation and AIDS-related illnesses.

He is a past member of the Veterans Affairs Canada, Canadian Forces Advisory Council and chaired various projects focused on strengthening mental health supports for members of the Canadian Armed Forces and the RCMP. He also has been an active member of numerous service organizations including the Canadian Association of Veterans of United Nations Peacekeepers, the Gulf War Veterans Association of Canada, the Royal Canadian Legion and the ANAVETS. 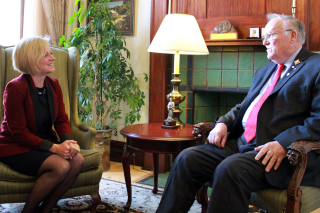 Lieutenant Governor Ethell meets with Premier Designate Rachel Notley on May 7,2015 to invite her to form the government.

He is an Officer of the Order of Canada, a member of the Alberta Order of Excellence and the Order of Military Merit and a Knight of Justice of the Order of St. John of Jerusalem. In 1987, he received the Meritorious Service Cross for his work with neutral observers to plan and negotiate large scale, short notice prisoner of war exchanges between warring nations in the Middle East.

Colonel Ethell He holds Honourary Doctor of Laws degrees from the Universities of Alberta and Calgary. In 2011, he became founding patron of the Lieutenant Governor’s Circle on Mental Health and Addiction. In 2013, he was awarded the Pearson Peace Medal by the United Nations Association in Canada. 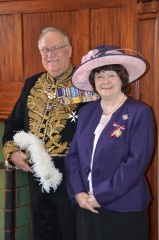 In 2012, Lieutenant Governor Ethell revived the vice-regal tradition of wearing a civil uniform for ceremonial occasions.

He first moved to Calgary in 1956 and married his wife, Linda, in February 1960. Their family includes two sons and daughters-in-law, Darrell/Ruth and Doug/Iryna, and two grandchildren, Natalie and Alec. Although Colonel Ethell's military career took the family around the world, they have always maintained a home in Calgary.